It’s sad that I couldn’t think of a better title than this but hey, here we go.

So the longest Celine Dion song I have ever heard played while I waited to be shown in to see Lea, the Manager. I swear it went for a full seven minutes. The place smelt like pine and reminded me of a church so I was a little uncomfortable in the waiting room.

The theme of the day must have been love songs because they played all those lame 80’s love rock ballads over the speakers. The admin guy and I had one of those awkward conversations while I waited, something lame about the weather, then he went back to work.

There are windows everywhere through the rooms so it feels a bit like Big Brother. Obviously being the good student I am I wouldn’t not do work, but if someone did want to dawdle they’d certainly have to have the talent of looking like they’re actually doing something when they’re not.

I was shown in to see Lea and she gave me the run down of the general stuff. She gave me a tour around the radio station. It’s pretty simple- a pre-recording suite, which is a little run down, two studios, a small newsroom with a computer that I swear is from the nineties and a lunchroom. They have a cat, too, but I wasn’t introduced.

I went to the bathroom before beginning my work and for some reason someone had toothpaste and a toothbrush sitting on the sink.  Not only that but the circuit breaker thing is in the bathroom. I’m not sure why someone thought it was a good idea to put it there of all places.

The newsroom is small, like I said, and there’s a weird sign next to the computer, too. I was confused, then a little grossed out. 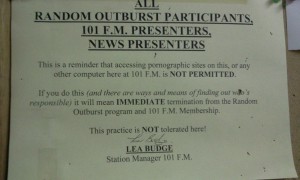 The fact that this had to be put up makes the whole thing even worse.

After that I sat on an ancient, squeaky chair and tried to get the mouse to work. It’s as old as the swivel chair and sticks when you click on anything. Despite that (and the dial-up speed internet), things were fine.

The day was spent with just me writing up a news update– the lowdown of four different stories in radio news format.  I didn’t get to read anything but Lea told me that I could read the stuff out the next day.

Aaand that was pretty much my first day.