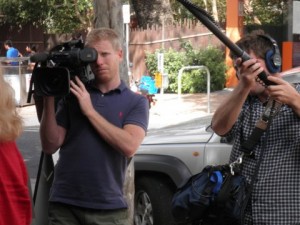 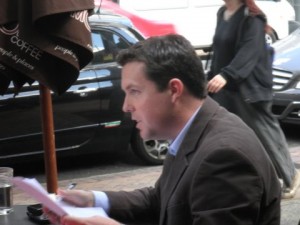 Yesterday, I was at a café in Toowong having coffee, waiting for my partner.
A well-dressed young man, sitting at a table with a folder in front of him, seemed vaguely familiar.
But I was too busy hating Centrelink to pay much attention.
When my partner showed up, we stood at the edge of the footpath, smoking.
Someone who stopped to talk to us said Channel 7 had been hanging around, filming.
I thought they might have been filming the ABC offices (next door to Centrelink) around in the next street.
I had just seen people coming out of the ABC offices and loading cases into a waiting taxi. I presumed they were the last of the staff, vacating the premises.
A well-dressed woman with a briefcase sat down opposite the well-dressed young man.
A camera and a boom (that big furry thing)closed in fast.
Before the woman had time to compute that her potential loan client was a journalist in disguise, he had whipped out a document which he held up and tapped.

Is this news? Is this breaking news? 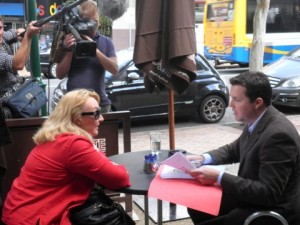 I found out later the journo was Damien Hansen from Today Tonight.
I had a pretty good vantage point at the adjacent table and I strained to hear what was being said but the noisy Toowong traffic kept drowning out their voices.
‘Is this your signature,’ Hansen asked a number of times.

Is this a story for me? 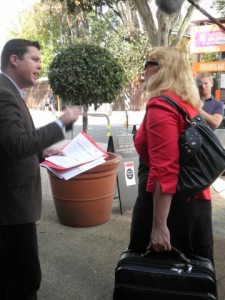 Hansen wanted to know why the woman had signed up an elderly couple for a loan.
The woman said she didn’t have all the details for every person who got a loan.
She processed so many.
Other people were involved.
She thought the couple was employed.
‘But you knew they weren’t cleaners,’ Hansen said and asked again how a loan which could not be paid back had been approved.
The woman said she believed the couple had ‘cleaning jobs’.

What’s this about? Who is in the wrong here? Is the loan provider scamming? Is the old couple responsible for lying to get the loan? Or is the journalist making a mountain out of a molehill?

I’d begun to feel sorry for the woman, because it was clear she had been cornered and Hansen was not letting her off the hook.
‘You got me here under false pretences,’ she said. ‘You said you wanted to talk to me about a loan.’
‘I’d still be interested in getting a loan…’ Hansen told her.
She scoffed. 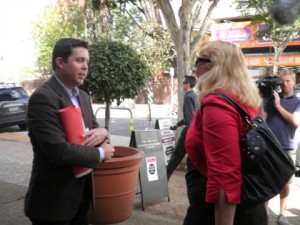 The woman felt put upon, that’s for sure.

But if she put her signature to something, doesn’t that make her responsible?

She finally got up and walked off with Hansen, the cameraman and the boomboy in pursuit.
I followed, still trying to work out where these people were from.
Hansen told the woman she must have realized, by the couple’s age, that they could not have been working.
The woman said she knew lots of old people who still worked.

‘Including my father,’ she shouted.

The camera filmed her retreat down the street and Hansen went back to the café to get a coffee. 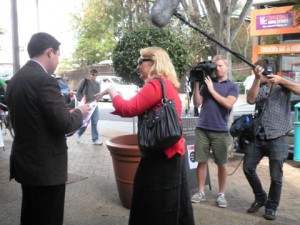 He didn’t want to tell me where he was from. Was he obliged to? It would have been polite. Good PR, even.
But he gave up his name when my partner, who had been taking photos, told him I was a journalism student.

When I got home, I googled it.
I found something about how he had been bashed doing a ‘squat’ story. And something else about ‘gutter press’. Gutter Press? Hmmm.
What if the loan company really was dodgy?