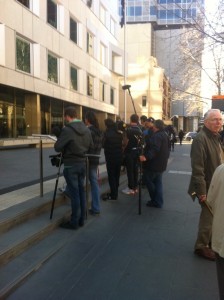 I woke up to a extremely icy morning which seemed to last almost the entire day.

Arriving at work so I can attend the news conference is tough work. I am most definitely not a morning person. I have developed a relationship with the lovely man who pours me a strong coffee each morning as I rush through the doors, wave at my favourite security lady and make the trek from P to level 10.

Walking in the offices, I make a look around for a spare desk as they are scarce. Eventually I get told someone isn’t in and I can sit there.

Planting my stuff down, grabbing my coffee and heading into the news conference has become my regular daily activity.

We go through the usual ideas, some that have developed over the last 24 hours or have been worked on previously. I am hoping they have picked up my story about “dessert trends” and thankfully it seems they have.

Claire, the Editor tells me she’s yet to read it but will do later. She also mentions that she would like to see my opinion pieces so I send them through as soon as I get to my PC.

The previous day I’d expressed my interest in going to court after covering the weird and wacky ways in Brisbane Supreme and Magistrates, I’d developed a bit of a thing for attending court.

Kathy, the lady who looked after me at HS says that she is still awaiting hearing from that team and to just wait while she finds out.

Heading over to Vanessa to check whether or not it is OK, she nods and says that is no worries.

Back at my desk, I get the all clear to head down. I get the mobile number of Paul Anderson who is the court reporter for HS and heading down, I notice the weather really hasn’t improved as I clutch my scarf in the vain hope it will keep me warmer.

Arriving at court and going through security, I sit down and watch the other reporters arriving. I was glad I got there early as everyone started to line up to go through yet another security check point (these Underbelly style trials don’t take any risks)

Sitting next to family members of Carl Williams (I assume this as the guy looked like his twin) I felt a certain amount of pressure that they were reading my notes and this was most certainly a point in which I wished my shorthand skills were better so they couldn’t read it.

There was a brief break in the trial as they discussed a matter between two magistrates and I had a look around the court room. The accused was sitting directly behind me which made for some nerves for the remainder of the trial but something that spun me out more was the fact I was one row away from a Channel 9 reporter who I’d been watching on TV for decades!

His name escaped me so I didn’t want to approach such a busy name with “hello.. you?” so I left it.

The court was adjourned til tomorrow but in the two hours I was there, I witnessed some interesting components of a murder trial.

Leaving the court, I stayed with some of the photographers who were waiting some of the key witnesesses to leave (I am leaving out their names as I am not sure if they have been suppressed or not)

Chatting to two Channel 7 reporters, they laughed about the usual questions they get on a daily basis and told me that this was about the biggest thing they were covering this week.

As the witnesses left court, the marathon began. The photographers chased after them as they fled, making sure they didn’t get too close to them and snapping furiously away.

Meanwhile, me and my tiny HS-supplied SLR took around three photos before the memory was full. I said my goodbyes and left as I had just got a Tweet that famous pjama designer Peter Alexander was making an appearance.

Arriving at ‘Melbourne Central, a fairly upmarket mall I tried to work out where the shop was. Asking some friendly make-up artists, I made my way upstairs and walked into the shop. 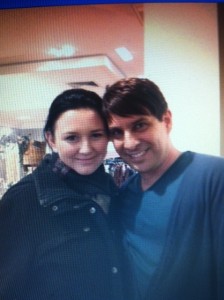 He was away buying a shirt from another store but the manager told me he’d be back in a few minutes. I roamed the store, taking a moment to smell the “cilantro and lemon soap” which was actually quite delightful.

The manager strolled over and said Peter was ready so armed with my dictaphone (amazing device by the way) and a smile, I greeted Peter with a handshake and he asked what this was for.

Explaining without stuffing up my words too much that I was an intern down from Brisbane working at mX, he was helpful with the two or three questions I posed to him and without being too nervous I asked if he would mind getting a photo. He nodded and we snapped away.

What a load, I quietly thought to myself. But amazingly I didn’t get many negative responses and most people believed in it despite being hurt in the past, they still thought “the One” was out there.

After grabbing a quick bite and heading into the office to type up the answers, it was time to head off. Some of my stories had been subbed and left on my desk which I took a quick look at but happy they had suggested we discuss tomorrow.

Leaving the office, I could’nt have imagined a stranger thing happening but sure enough that seems to be my life at the moment! 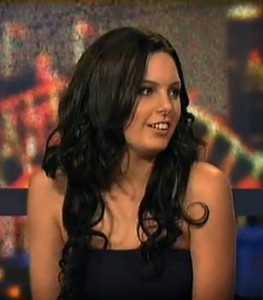 (photo: www.tvcentral.com.au as she was camera shy)

I’d purchased a Sub and was walking up the hallway when I heard a familar female voice, I did a sly glance over and it was most certainly her.

The infamous “St Kilda Schoolgirl” Kim Duthie. I couldn’t believe it. My heart was going about a million miles an hour when I realised I was in the company of a 17-year-old that had virtually taken down the AFL and Ricky Nixon’s career.

Assuring myself it wouldn’t be a good idea to make conversation, I blurted out a “can I ask you something?” to which she was already in the lift and yelled “I’M NOT HER! I’M… ERM… DANIELLE JONES!” or something to that effect.

“I know it’s you. Don’t worry,” I said staring straight into her Ray-Bans.

“I’m sorry for what you’ve gone through and you know, it sucks that they treated you that way,” I said, not really thinking when I spat these words out as I noticed she had hit ground 1 and was mere seconds from vacating the lift.

“Thank you. That actually means a lot,” she said.

The doors opened and as she left, she turned and said “maybe see you round?”

“Sure thing.” I replied back with.

It was an odd, unexpected that left me virtually speechless. Here I was in a lift with a girl who obviously had some issues with her own identity and the situation she had put herself into, checking herself into a motel on a week night with her best friend.

There were so many more things I wanted to ask her, so who knows – maybe I will ‘see her around’ before I leave…