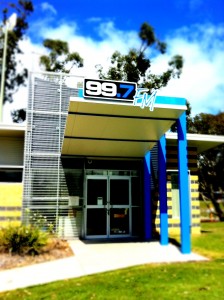 It was Father’s Day on a Sunday morning that I had my first chance to go on-air with Clint and Greg at 99.7FM’s Radio Station.

I had a bawl with the guys.

It was actually a 70’s show with all-time classics carefully compiled together for the celebrationary Father’s Day theme.

I walked into the station and felt that happy-go-lucky-feeling of familiarity.

I’ve walked into a radio station before (a few years back) and this defintely had something distinct and special about it.

So, Clint. He is very technically-savvy and is the nominated guru of, well, technical jobs around the studio and the station and of course a Drive Host for 997fm.

Greg is a jovial bloke. He’s the General Manger of the station.

He always makes wise-cracks and loves a bit of controversy or more lightly to stir the audience a little with his show/s. He’s great value with a sense-of-humor but he runs a tight ship.

Great manager. And coincidently my neighbour.

So the guys put me on the spot with a few jokes and questions on-air (while my fianc’e was INTENTLY tuning in, waiting for a shout out which he missed, after all that!)

Richard Lancaster. A-jack-of-all-trades. He hosts an arts radio show called “In toto” and he also writes the “Culture Vulture” Column in the Redcliffe & Bayside Herald.

Richard’s son, Paul Lancaster was one of Jschool’s first graduates and also the ex-editor at the Redcliffe & Bayside Herald.

(John, Paul’s contact details I’m still to get for you!)

It was at this moment that Richard and I started having a good old yarn, when I said I was very interested in videojournalism and gaining experience behind a videocamera and so on and so forth, when he offered me to assist him in shooting a television series in Redcliffe & Scarborough (airing on Digtal31, formerly Briz31, in October this year.)

Over the upcoming weeks while I was on holiday and available he gave me a chance to be part of his team and get all hands-on experience required to shoot a t.v. series.

I almost jumped out of my skin with excitement at the offer and said I was available the following week.

Things felt pretty surreal at this point. I couldn’t wait to be part of this project. (That’s is another blog story, to come.)

Back in the studio the guys wrapped up their fun-filled 70’s show (2hours really flies by) and I went back to Clint’s recording studio.

This is when the real fun began. 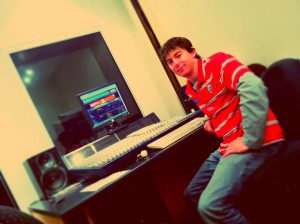 I was asked to read my very first promotion.

To go on air that same afternoon.

They needed another voice as they were down one.

I hadn’t tuned my broadcast vocal chords for a very long time. (8 years to be exact.)

I met Emma. Also a young journalism student, and a regular voice for promotions who had a soothing and smooth sound.

She had a fantastic luring voice.

Could I live up to it?

Well. We both ran through the script a few times.

Doug, another announcer, also joined in the promo, which gave it a good balanced sound.

Clint did sound checks, and before you knew it it was ready for post-production and Voila!

Queued to air. The process was that quick. 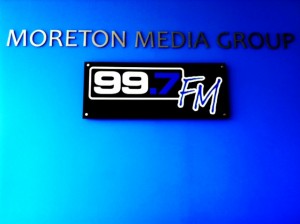 caught my eye in the lounge section was this poster

I loved it. It broke up the day nicely…

It was at that point after Clint and Greg did the playbacks that they said that I had a “good voice” and they’d love me to do further promotions for them. 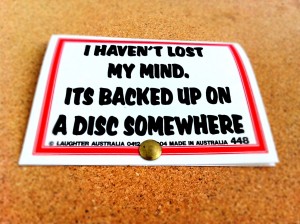 Radio & Television offers in one day?

I was astounded and grateful all at once. This was going to be so much fun.

During our 2 weeks of holidays I’ve done several promotions that have gone to air. 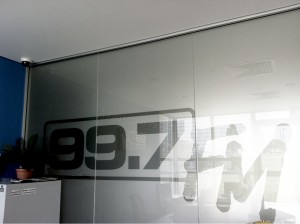 So, if you happen to tune into 99.7FM and happen to hear a female voice doing promtions or community notices it may well be mine.

I’ll blog more radio links as they go to air.