I went to a cocktail party last night, organised by the University of Queensland’s Journalism and Communications Students (JACS) and the UQ United Nations Student Association (UNSA). The party was at Era bistro on Melbourne and Merivale Sts in South Brisbane.

I was quite nervous when I arrived; I don’t like approaching people in the flesh when I don’t have a good reason to talk to them. Learning to overcome this a little was part of the reason I wanted to go. 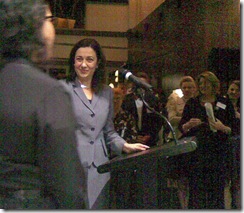 Ms Palaszczuk spoke about her priorities as Disability Minister, which include moving young people with disabilities out of aged care facilities, and ensuring deaf people have enough AUSLAN translators, especially in Townsville. She also talked about her early days in Young Labor, about attending the London School of Economics and Political Science after winning a scholarship, and working on Tony Blair’s election campaign in 1997. 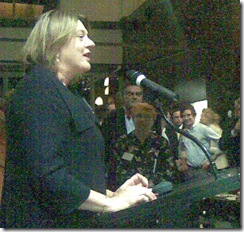 Linda Lavarch addresses the function. Ms Lavarch was Queensland’s first female Attorney-General and the first female lawyer to be elected to the Queensland Parliament.

Linda Lavarch spoke about her early years as the first person in her family who’d ever gone beyond year 10 at school. She said the only way she was able to go to university was because the Whitlam Government abolished up-front university fees and introduced TEAS (a living allowance for students, like today’s AUSTUDY). She said the fact that decisions made far away from her had affected her directly made her interested in politics. She said as a student at QIT (now QUT) she was involved in protests against the Bjelke-Petersen government, and said we should always question how decisions are made; we should not sit back passively and accept that what we are told is the only way things can be done.

Before and after the speeches I circulated and met some interesting people. I talked to Jade Hamwood from Rio Tinto, Michael Keating, a retired general and now Chair of the Australian Republican Movement, Geoffrey Ewing from the Australian Institute of International Affairs, and several students, including a law student from the University of Queensland who told me about how copyright law can be surprisingly interesting. She was right; I spent perhaps ten minutes discussing things like the theory of copyright and Creative Commons with her.

It was an interesting night; I picked up some useful story ideas, some background knowledge and ideas on where to build up my own understanding of the world.