Council meetings as a source of news stories

I am five months into my Jschool diploma and currently have six stories on Newsbytes. Out of the six, three stories have come from attending council meetings and listening to the submissions made by residents concerned about something that is happening in their suburb or the street they live in.

Local council meetings have proven to be a great source for stories. From developers looking to build new style developments that are never to be sold or locals concerned about preserving houses that are from a different era, there are many opportunities to get a good story.

Having never been to a council meeting, I was surprised by a few things. The rudeness of some of the councillors towards residents making submissions was a surprise, as was the way the councillors would sometimes argue amongst each other when one of them was asking a question of the speaker.

I was most surprised that people sitting in the public gallery were not allowed to film or (audio) record the meeting without prior approval from council. I was unprepared for this at the first meeting I attended and had to memorise the details of a speech that was made so I could do follow up research and write a story.

Both my visits to council meetings have been good learning experiences in getting stories and talking to people/gathering information and are definitely worthy of any journalists time. 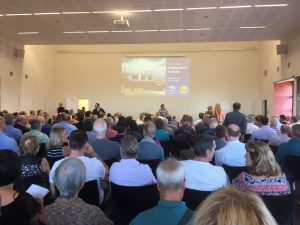 A packed room for a community forum held by council.

« Podcasts and the Intellectual Dark Web » Everyone has something to say