Podcasts and the Intellectual Dark Web

Many well-documented changes occurred in the media with the advent of the Internet, Google and Facebook.

Something else that occurred was the invention of the podcast, a far-reaching format that allowed for many voices to be heard, but of great importance was a particular group of people outside the mainstream who gained traction.

This loosely aligned group, semi-ironically named the Intellectual Dark Web by Eric Weinstein, is made up of people from across the political and professional spectrum, unified by their observance to and desire for the preservation of free speech.

What was once obvious to many has become a refrain for one of their group, Ben Shapiro, who simply states their combined approach and refutation to those who would silence them:

Facts don't care about your feelings. 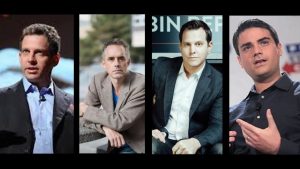 For a constantly updating (and unofficial list) visit http://intellectualdark.website/

What is alarming is that the ideas they discuss were not considered ‘dark’ or alternative to mainstream 10 years ago. Simply acknowledging the biological differences between men and women, entertaining those whom disagree with you and refuting the intersectional politics that have crippled Western societies is enough to be heretic in this “progressive” age.

Bari Weiss at the New York Times wrote an excellent article on the IDW in May detailing the possibilities and potential pitfalls of the movement while profiling the vanguard. Sam Harris, the atheist neuroscientist, Hillary Clinton supporter and host of the Waking Up podcast, revealed to Weiss his watershed moment:

After his (Harris) talk, in which he disparaged the Taliban, a biologist who would go on to serve on President Barack Obama’s Commission for the Study of Bioethical Issues approached him. “I remember she said: ‘That’s just your opinion. How can you say that forcing women to wear burqas is wrong?’ But to me it’s just obvious that forcing women to live their lives inside bags is wrong. I gave her another example: What if we found a culture that was ritually blinding every third child? And she actually said, ‘It would depend on why they were doing it.’” His jaw, he said, “actually fell open.”

“This was the first time I fully understood that I had an equivalent problem with the secular left.”

The importance of the podcast to some of the IDW is that they are outside the editorial controls of traditional news media, so they can publish and discuss topics at will. There is less of a filter between the speaker and the listener. Some use profanity, some are partisan, others take their time to elaborate an idea or connect to previously disparate ones. It is authentic.

Just as important is that there are no restrictions on running time, content discussed or guests invited. For example, The Joe Rogan Experience runs for three hours allowing great depth on concepts and issues that might only have a 20-second sound bite or five-minute report in a news cycle.

Unlike television or print there is no time or space restrictions, they can (and do) talk until they have come close to what Peterson likes to calls “objective truths.”

Peterson has become a guiding light for many young men and is famous for reasons such as opposing Canada’s Bill C-16 compelling speech, his 2018 book 12 Rules for Life: An Antidote to Chaos and, among other things, his “uncomfortable” talk with UK Channel 4’s Cathy Newman where his precise speech, resolute and reasoned dialogue left his host dumbfounded and searching for “gotcha” moments. To Channel 4’s and Newman’s credit they published the interview unedited on Youtube:

Facebook, Google and YouTube have been documented using their algorithms to discriminate against these people, which is why the IDW are not solely reliant on these major companies to be noticed.

People subscribe, companies advertise and podcasts are relatively cheap to produce. The Rubin Report began in Rubin’s basement and relied on Patreon donations to grow his podcast to the behemoth following it has today, but he still films from his basement.

It is evident these people are being noticed. The next question is why?

On Sunday, Eric Weinstein was on The Sunday Special with Ben Shapiro podcast (full video below), where he detailed why he believes this format is so popular.

“The institutions are out of control,” Weinstein said about the government and media, among others.

There are three issues he identified that: “if I can see that you’re lying without doing any work I lose trust very quickly.”

These issues are Trade, Immigration and Islam.

“The news media are not representing these issues accurately. The gated institutional narrative depended upon there being very few outlets to challenge what the major thematic narratives would be,” Weinstein said.

The Intellectual Dark Web has proven a trustworthy and robust challenger so far to traditional news media.