Wednesday was hectic! All that work that couldn’t get done on Tuesday was piled up for a nice and busy Wednesday.

Being busy is nice. You get that buzz that feels like you’re doing something and enjoy crossing things off the list. At lunch Oliver and I worked out I had around nine stories to write, and he had five or six plus the ones his Wynnum editor would give him!

(One of the best parts of this experience is the awesome Japanese shop with awesome noodles right outside Quest).

I didn’t have a voice recorder but it wasn’t a big problem as the journalists there just type the interviews as they talk. It’s kinda hectic to begin with but you get used to it, just as long as you go over it straight after you hang up. I knew lightning speed touch typing would come in handy!!

Did two interviews with a local flood hero and a new cafe owner in the morning, logged photo shoots and did a vox pop at the local shopping centre. The topic was whether Australia should get rid of 5c coins. I found it surprisingly easy getting people to talk and got some good quotes.

That morning I realised I had been calling the South-East Advertiser’s editor the wrong name. Derek was actually Gary. I felt mortified but comforted myself reasoning that he could have easily corrected me any of the previous two days.

After lunch, I did another flood hero interview. After Oliver went home I tried to use his vacated computer with the internet, but it didn’t want to work for me so I took it as my cue to go too.

Thursday began like the other mornings. Drag myself out of warm bed, drink tea, eat toast, and warm up Erl (my tank of a car). Erl can be a grumpy old bugger sometimes and doesn’t like being cold and wet with dew (understandable I suppose). He decided on Monday to embarrassingly stall on Coronation Drive, so I’ve been making sure that doesn’t happen again.

But on Thursday, warming up the car was NOT a good idea. I had petrol, just not much. So while my car was getting cosy it depleted the petrol I had been planning on using to get to the petrol station.

Dammit, dammit, dammit. June must be stupid month for me considering last week and my “destroy brand new laptop” episode.

I rushed to the mower and whippersnipper and tried to craft a plan to extract their limited petrol resources. I called the mechanics (my Dad and bf) and concluded if I was going to get anywhere I would have to pedal myself down to the petrol station and once again be late for “work”.

Once I bought the jerry can and filled it, I tied it to the back of the bike and pushed up the steep hills of Taringa.

Petrol vapers, spilt petrol and a homemade bottle funnel later, and I was good to go.

I had called up to say I would be late but the receptionist forgot to pass it on. Not to worry, it was just the journalists plugging away at their stories and neither editor was in yet…

I realised the importance of fact checking today and why not to wing it thinking “it’ll be right.”

It’s just something that you just need to kick yourself to do otherwise you’ll end up looking stupid and lazy.

I interviewed a bakery owner whose name was given to me as Cp Kag. I knew this interview was going to be difficult (hello accent). I got his name down as Chow Paw, known as Kane. 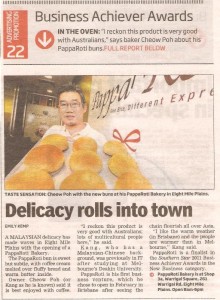 I even got him to spell it a few times.

Luckily I also got his email. When I emailed him the details of when the article would be printed I called him Kane. Turns out it was Kang. I then doubled checked the rest of his name and it was Cheow Poh, not Chow Paw.

Friday I’m going to make sure I’ve got all the facts straight on all my stories before I send them to the editors. I read in the internship package that your interviewees would rather have accurate data written about them than not, and don’t mind being bothered for it.

I also apologised to Gary/Derek on Thursday for calling him the wrong name. He just shrugged and nodded distractedly. Obviously it hadn’t bothered him at all.

After a long and busy day I was pretty tired and choofed off home at 4.

« Day 3 – Phew, we made deadline » End of Internship… Yay holidays!