Tim streaks ahead at Noosa Half Marathon 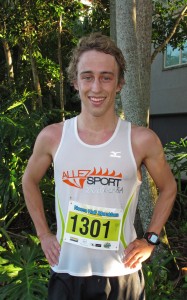 Hundreds of runners, from the elite to the general public, took part in the sponsored Noosa running festival based at Noosa Sound on Sunday morning.

The scenic route takes the runners along Noosa Parade through to the café and green precincts of Gympie terrace as it winds along the Noosa river.

Clear skies saw the 21km runners set off just after sunrise in perfect weather on the fast and flat two lap course.

Alexandra Headland’s professional triathlete 22yr old Tim George led at the turnaround and was a popular local winner in a time of one hour ten minutes and 50 seconds. Pleased with his time, the friendly, relaxed part-time QUT Brisbane law student commented cheerfully on his psychedelic yellow Mizuno shoes; “It’s a bit hard to find a singlet to match!” he said.

“I really enjoyed the crowd support and they let me know the gap distances along the way,” he said. He is an athlete to watch, having won the Men’s Open Elite race at the Mooloolaba Triathlon at the end of March.

In the women’s race petite, blonde Brisbanite Clare Geraghty won in an emotional finish with a time of one hour 14 minutes and 18 seconds. The 24 yr old former dancer is successfully rebuilding her running career following injury, having last won this race in 2006. She was very happy with her time.

Enthusiastic friends and family members crowded the funnelled finish line, voicing support and encouragement as the announcer called the runners home amid music and clapping. A fantastic army of volunteers assisted and did everything from marshalling to pace –setting to help make the USM organized event a huge success.

Most runners were elated at the finish, achieving personal best times and running because they can.

Speaking at the finish, mates and seasoned runners Pomme and Dave said they run for personal satisfaction and to keep fit. Pomme has run for about 20 years and Dave for the last four after an injury induced interval. Both were happy with their times and the event.

Angelo and Elane, sporting the South African flag, did their first Noosa 21km race and have been in Australia for five years. They really enjoyed the run and crowd support.

Husband and wife James and Tammy came down from Gladstone to do their second Noosa 21 km. Both commented happily on the great atmosphere and said the kids at the refreshment stations were fantastic in cheering the runners on.

Lisa Pringle, media manager for the sponsored event, said participants in the three events – 21.1km, 10km and 5km run/walk numbered about 3000. “Because of the change of date, we had no Tanzanian runners this year. The numbers across all events are up from last year with many running the race as training for the Gold Coast Marathon in July,” she said.

The colourful running festival was part of the Noosa Winter Festival which also featured swimming and cycling events.

For a list of results in each event, please see www.usmevents.com.au