9am: I veered into the Redcliffe & Bayside  Herald Office, greeted by the receptionist and ushered into what I thought was going to be like a scene out of  the film “Shattered Glass.”

N0t at all dark and dingy.

Redcliffe Herald’s Editor, the extremely lovely Kylie Knight was every bit as pleasant as I had heard.

Somehow I envisioned my editor would be a stressed-case who wouldn’t have the tolerance for lil’ ol’ interns like me, but Kylie did everything to ensure that I felt warm and welcomed immediately.

She directed me to a front office room.

After I ran through the rigma roll of paperwork I’ll be shown to a cubicle.

“This is where you’ll be working,” she said.

My very own office? 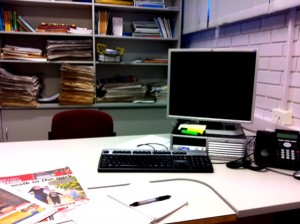 Okay so judging by the newsroom I was the only one in an enclosed office space with two doors.

It appeared the rest of the staff including Kylie were all in the “open cubicles” I’d heard my buddy jscholars talk about from their previous internships.

I followed her around skimming a quick tour of the newsroom and was given brief intros to the redcliffe team, in a four-cubicle hub made up of attractive, young, bright-eyed lasses all smiling.

From my office station.

The Western Wing.  Made up of wild conversationalists. And Amanda, (I think she’s in advertising for memory, AA) who has a broad “nu-zulund axe-scint” and is approachable as well as attractive. (AAAA)

I didn’t know which newspaper this lively hub worked on, but I’m sure in time I will.

Note to self. Also Home to the Photographer.

I’d mapped out the “gangs” in position to my “south-side” office section.

I mean given that I was under direction from three newsapers right?

So after the ‘meet and greet’ I was seated back in my office with a copy of the Redcliffe & Bayside Herald and the North Lakes Times.

I perused over the two papers.

Kylie told me today was the deadline for the North Lakes Times and for half of the Redcliffe Herald.

Hence I’d be left alone for the most part.

I briefed over the papers, and ran through the exercises but inside I was itching to get some stories flowing.

At the same time I was listening intently to the journos on the phone and impressed by their professional phone manner and interviewing techniques.

Young brunette Journalist from the Redcliffe Herald, Kay Picton, booted up my computer and said for me to save my work on her hard drive.

This was Kay’s office? Nice!

I’d be a happy camper if I had this space too.

I have to say the computer was pretty slow and in my mind a bit old school, but it did the job.

My 1st task: A press release about two Brisbane poets who had won awards.

I contacted the media officer to find out their backgrounds etc.

Potential first story if I wanted to.

The media officer said she’d email information to me.

Until then move on to the next.

I needed to find something new. Fresh. And Exciting!

Kylie came and checked in on me, so I discussed a story idea I had in mind about a fairly new local cafe in Scarborough that I’d visited recently, who’s business was booming.

She thought it was a good idea and said to have a chat with the photographer to arrange a photo shoot.

I could get my teeth into my first story idea.

I phone-interviewed the cafe owner who was more than happy to chat about what his cafe offered and during all this talk about innovative ideas for his cafe he said that a “follow-up” article would be nice.

He said the Redcliffe Herald  had run a half-page spread in June, on the opening of his cafe.

Nice big photograph and all.

Declining, I asked Amanda where the archives of past editions were kept and she led me to the room next door where every printed edition over the past quarter was stored.

I flipped through the June 15 edition and hoped it was a mistake.

I came across the article and my heart sank.

The story had been done.

Sure enough I had a good follow-up story idea of new additions to this cool cafe etc.

But as predicted Kylie said they couldn’t run another story on a business again, so closely.

Old lesson learnt: Always be extra pedantic about checking if a story has been run before conducting an interview.

Save yourself the embarassment.

After my coffee break I met one of the three, minority-male staff members, Pine Rivers Press Editor, Nick Crockford.

After coffee and a chit-chat, he came by my office asking  me to search for “free” holiday events for the pineies (aka Pine Rivers Press.)

Thinking meh. This’ll be a piece of cake mate, I scouted the usual spots on the net to find free holiday events.

3: interesting enough for kids (and appealing to parents) aged 0-15.

Nick explained to me that alot of their events coincided with what the courier mail’s events so basically south-east queensland was the area I could cover without stepping outside the readership areas.

But why was the task at hand proving difficult?

I mean how hard could it be?

“It’s actually one of the hardest tasks,” he said.

It must be a nice relief when interns can source the miniscure publications that consume alot of their time.

I so would do that if I was an editor.

4pm: Seriously? Where has the day gone?

Following on from there I looked up local writers and found a potential profile piece that my editor thought was a good idea.

Kylie was happy with my next story idea and said for me to come in tomorrow to follow it up and arrange any photo shoots with the photographer.

Nick said he’d look over my holiday schedule events tomorrow and also for me to feel free to book the photographer at my leisure.

By 4.30pm I was kindly dismissed by my editor.