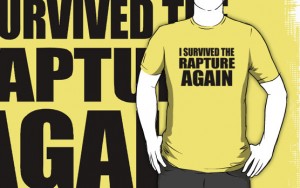 I’ll admit when I first started seeing the hashtag #rapture on Twitter, I instantly got excited and thought the band The Rapture were releasing a new album.

I was wrong. Very wrong.

According to American man Harold Camping May 21st, 2011 would be ‘Judgement Day’ and that as many people as possible should prepare for the worst.

Keep in mind old Harry predicted this would happen in ’94 but that was just an honest mistake and this time it was definitely going to happen.

Well, its May 22nd and nothing has occured. While organising my survival kit and ensuring my house was stable enough, I managed to fit in some time to prepare a play list to end the world in style.

10. Til the World Ends – Britney Spears

I’ve always been a Britney fan. Through the head shaving, balancing child on lap and that performance at the VMA’s years ago I have always had a soft spot for the trainwreck from Louisiana.

What a brilliant song to finish up our time on Earth. With lines such as “because maybe, you’re going to be the one that saves me?” of course this song deserves a spot on the list.

My inner Australian bogan comes out with this addition. Everyone loves headbanging to a bit of Akka Dakka and this song could be quite appropriate based on where you may have been heading on May 21st.

Radiohead are a favourite but in particular this song sums it all up.

6. A Rush of Blood to the Head – Coldplay

Not sure why I chose this, I kind of feel a bit melancholy and ‘meh’ when I listen to it but I still think it deserves a mention on the list.

From the highly acclaimed ‘My Beautiful Dark Twisted Fantasy’ record, this was a personal favourite. And I included it because of the highly appropriate lyric “we heading to hell, for heavens sake”

Of course I’m going to add a bit of Zepp to the mix! Great song, despite hearing it 1000+ times by aspiring guitarists (Wayne’s World, anyone?)

3. Who Will Save Your Soul – Jewel

OK, so this song has been heard around 34,000,000 times on FM radio but it does still deserve a place based on its message of death and no matter how much cash you have, we are all going to the same place.

The Dandies are probably my favourite band of all time (big call, I know) and this has to be in my top five. This song not only is a great song but the video to match is equally as amazing.

Utterly amazing and infectious hit by moody hipsters R.E.M, this is the pinnacle song I want to be blasting when the aliens land and take us all away.