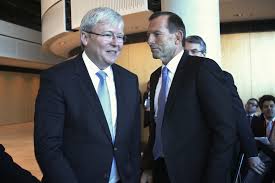 Truth be told, I have never been remotely interested in politics. I suppose that’s a bit of a concern for most aspiring journalists, yet I’ve never been able to tolerate the schoolyard slander and propaganda that runs rampant throughout the duration of elections. How do you even begin to separate fact from fiction?

This morning, I was met by yet again another news segment on Tony Abbott announcing how out of control our economy is, and that the onslaught of the boats of refugees were all a result of Kevin Rudd’s poor form as Prime Minister.

After witnessing a cringe-worthy “kissing babies” attempt by Mr Abbott, in which he ended up planting one on the back of a mother’s head, I had promptly switched off the volume, biding my time until REAL news came on. Don’t get me wrong, I appreciate the seriousness of our country’s leadership and the matters of economy and education (which Kevin Rudd has apparently promised to spend millions on), but are we not just being fed more and more fabrication from both sides? An Abbott representative was even caught off guard yesterday morning as he fumbled with a question against the Abbott party that was obviously impossible to deny fault in. He instead mumbled awkwardly, and then repeated stupidly a campaign promise of things to come.

Honestly.. We are dealing with two parties that are both at fault in some aspect, and yet are incapable of admitting their faults, and instead resort to slandering their opposition. Schoolyard flash-backs are becoming more frequent as this election campaigning continues, and the only resulting preference that we may have is who can slander and talk their way out of their mistakes the best.

I am looking forward to September 8th!