And the week draws to a close

Welcome to part two of my internship blog

Wednesday was rather quite with nothing really happening so I was to get new Wet n Wild opening in blacktown interview sorted which I worked on today as well as finshing off  some other things for pre-records coming up in the week. I guess when you’re the host of the program you don’t need to rock up till 10 minutes before the show as what Ben Fordham did today, he did say he had a lunch function on but we may or may not believe that. One part i’d never get sick of is when it’s time to go to air the fast walk everyone does to the studio with scripts and other stuff in tow which is pretty cool as you feel important even being the work experience kid. During the show it’s amazing how many people just come into the control room for a chat, which is good  as you meet some great people like Ross Greenwood who had quite an intresting icebreaker of asking who had a doctor ha-ha and also Steve Price (appears on The Project) getting in the zone for his show. 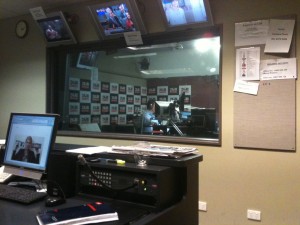 Thursday involved the usual morning confrence call which involved the entire team and some bloke called Karl Stefanovic decided to have a go at us for apparently doing a bad job yesterday and we really need to pick our game up ha-ha!

Today was finishing off and confirming the Wet n Wild interview for air at 5.20pm. The rest of the day was doing up possible reads for the show. Today was also special for the team as the Goverment backflipped on a second issue this week that ‘Sydney Live’ had been campaigning  aganist. The first happened on Tuesday when the government stopped a super trawler coming to Australia and this afternoon was the goverment reinstated flights for defence force personales over the age of 21 who are single, which was a big thing. So it’s amazing what people power can do. 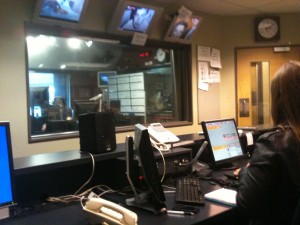 My view as the show goes to air

So Friday came around and I was emotional walking into the complex for the last time with my suitcase in tow, as I walked past Paul Henry waiting for his cab from Ten Breakfast who are in the bulding next door. Today like every other day involved the 9.30am confrence call with Fordo at Channel 9, I was fortunate to have one of my story ideas given the go ahead for show which was a briallant way to start the day. Today was also different because our Executive Producer Steph was away, leaving it to a no boss, chilled day!

One of the fun things was trying to track down people for interviews. This guy I was tracking down was Allan Cox who is going for 570 hole-in-ones for putt-putt for a new world record for chariety. I called 4 different organisations before I was even close to getting a hold of him. I was also having to write script for show, which was enjoyable especially when I nailed it the first time! (Going straight to the portfoilo) We had the entrie show ready by 12pm; since it was a pretty chilled show today. We were lucky to have british singer Newton Faulkner in studio for a pre-record which was cool. During the show I was in charge of trawling through Social Media looking for devloping news which was quite an interesting task. Ben was throughing a dinner on for Sean (Producer) who was turning 21, so he was asking viewers for ideas for a good party. The next thing that happened was a local seafood restraunt (Flying Fish) sent  a heap of seafood and wine for the team to celebrate, which tasted really good and was a fantastic way to kick of Happy Hour on the show. So I am hoping all newsrooms in future have this on a Friday Afternoon. So as 6pm passed over, that meant my internship was over, wheeling the whiteboard back to the office, saying my goodbyes to the crew that made me feel very welcomed and knowning that they’d love to see me back in the future is always a bonus. 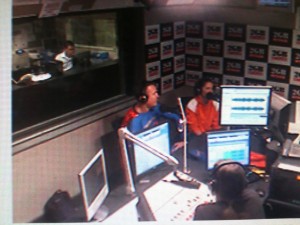 I'm the kid in the white shirt in the background, working quite hard

So I’d like to thank Steph, Sean, Dayne, Kirean and Ben for a fantastic week that I enjoyed extremley!!!

Also tune into the Can of Worms on Channel 10 on Monday @8.30pm for my television debut