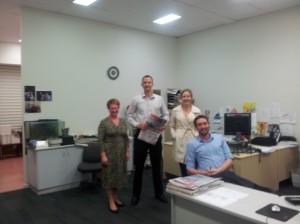 The team at the Caboolture Shire Herald

Final day started without hiccup, got ready faster and earlier than normal and made my way to the train.

All the paper’s staff, including the editor were busy with deadline so I wasn’t given as much to do. All-round a pretty slow day and it was quite sad to leave in the end.

The staff throughout the week were very helpful and didn’t mind taking time out of their busy schedule to answer my questions or help with organizing a photo shoot.

One story idea I had today was passed on to the Pine Rivers Press, which I didn’t mind. I’m not as competitive as I should be in this business, but I think it is still good to get a story out there even if you aren’t the one writing it, or else what is the priority?

Funnily enough I saw a tape outline of what looked like a miniature crime scene, it was revealed by the staff that it was the murder scene of a particularly unfortunate mouse that had met its end by a cricket bat (the mouse was long gone). Kind of odd, but the team there is quirky like that.

Yet another experience at a community newspaper finished, and even more published stories under my belt. Most importantly I have raised my confidence in my interviewing skills yet again.

How Andre, the editor, manages to multi-task overseeing and completing two papers with two deadlines at once is an immense task. The deadlines roll on endlessly, it seems the work of an editor, in fact a journalist, is never really done.

The internship may not have been at the biggest or the most important paper, but the smaller a paper the closer its members are and the better they work together. This closeness transfers to the community in the form of closer ties to the paper and its staff, cheesiness aside, a community newspaper is an invaluable part of a community and is a fantastic place to start as a journalist.