the lights are coming on

Monday
I was still stumbling around.
I had a great story idea.
Funny! Weird! Entertaining!
I loved it.
A Chinese man had a beauty treatment. Got into a bath of eels (they are meant to eat off dead skin).
A tiny one wriggled up into his penis and he had to go to hospital where the eel was found dead in his bladder.
So, I wanted to ask Ipswich hospital about their very own bizarre encounters.
Stuart didn’t like it.
A couple of other ideas were okayed.
I did a story for Veronica (Ipswich Advertiser editor)
School holiday activities for kids 13-17.
Went with photographer Sarah for photo.
Kids were learnng pizza-making.
A hip-hop workshop was scheduled for the afternoon.
I asked them if they were looking forward to it.
The boys were blasé and the girls were shy.
I rang the co-ordinator later to ask how it went.
She said they loved it.
Vox-pop: Australia Day holiday changed to Melb Cup Day? 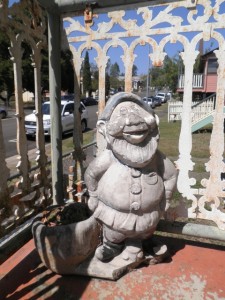 Tuesday
I went to the Council meeting.
I thought it began at 10.
It was actually 9 – and prompt – so I got there just as it finished.
I was invited to stay for morning tea.
How hospitable. How civilized.
Cr Charlie Pisasale made me an instant mocha. 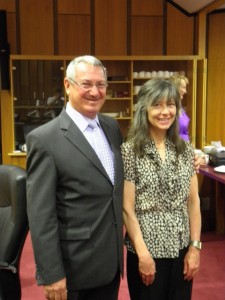 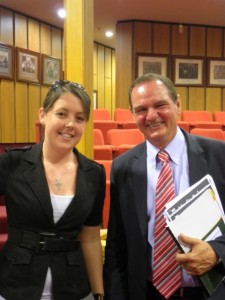 Mayor Paul Pisasale at left with guest.
Met him briefly.
He seemed pre-occupied.
I couldn’t finish my very nice cake – a muffin size fairy-cake with a yoghurt lemony type of cream.
So I wrapped it up in a serviette and took it home for later.
Contacted local charities for a story.
That idea seems to have fizzled out…
but 2 people I met on the street gave me other ideas.
Talked to Danny Mortison, Council media and he told me a few things 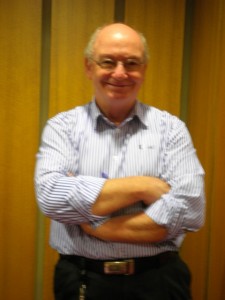 Wednesday
Kate Lemmon, court reporter was back this week so I went to court with her.
Very interesting to see how she operates.
She had to keep dashing back to another court to check out proceedings so I kept taking notes.
Wrote up 2 cases when I got back.
I know I missed some vital details but I hope they were helpful.
Must remember…don’t pause to think about to think about the awfulness of it all…just keep writing.

When I got back, I found a stack of media releases on Veronica’s desk.
One about small business seminars was very useful.
I scrapped ¾ of something I had written and replaced it with info from the release.
Thanks to Danny Mortison.
Made phone calls and sent emails.
Who did the vox pop???