It was hot on Friday.
Friday was hot.
I went with photographer Dave to the skate park in Bundamba to meet up with scooterboy, James.
He and his dozen scootering, skate-boarding and bike-riding friends seemed like a nice bunch of kids.
Just having fun. 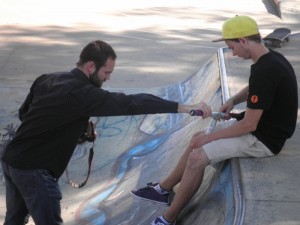 While Dave photographed James, I photographed Dave.
Dave got a great shot of James sitting on the skate ramp, his friend up in the air behind him, on a bike.
In big black lettering, painted on the concrete at the edge of the ramp, was an apology.
James said it was from a ‘dude’ who spat on him.
It was faded out, like the graffiti on the skate ramp.
Was it the fierce Queensland sun or the council’s attempts to clean up?
I found out, on the way home that it was Dave who took the Ned Kelly mask photo that i put on one of my posts.
My day did not begin auspiciously.
I had 4 story ideas. They’d all been done
Stuart asked, ”Do you have any more?”
“No.”
He likes to get the news conference business over briskly. 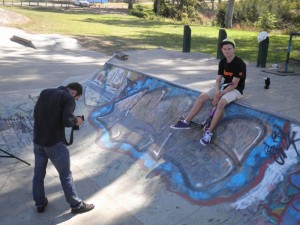 I made a couple of calls. I added to ‘scooterboy’ and thought it was done but when I later read what I had written, because I had something to add, I saw it really wasn’t very good at all.
So I had to change it around.
I spent most of the day looking for stuff. Trying to think of a story from that hadn’t been generated from other media. I finally got an idea. I hope it’s usable.
I’m hoping to come up with some more ideas on the weekend.
I asked sub-editor Linda to be my interview subject. She said okay.
The vox pop was: Broncos or Dragons? 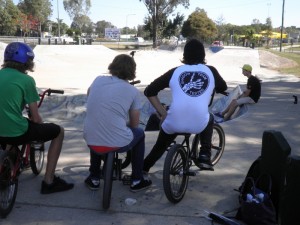 « Week 1 of Hervey Bay – such a weird place » Yargh, me hartys its international talk like a pirate day.