Internship Day 7: The Prof drops in… 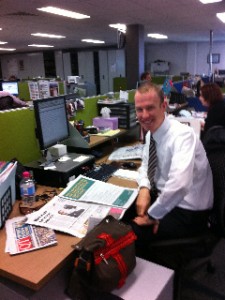 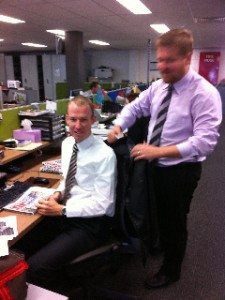 PAST & PRESENT: Zane and I in ties Photo: John Henningham 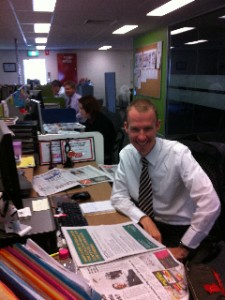 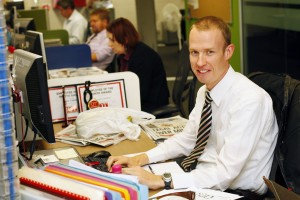 LUKE PHOTOSHOPPED: His desk at the QT Photo: David Nielsen

NC was different today as the CoS and editor was away. The CoS had a day off as she had worked a weekend day and the editor was away at a meeting until lunch. So the NC was chaired by the senior reporter. It was a bit more a of relaxed, jokey feel. I pitched an idea gathered from a local resident and it was more opinion based than newsworthy. Might be good for Zane’s opinion column as he agreed with the issue.

I continued to work on some transport stories which I am enjoying, then the Prof dropped in for a mid morning visit. He took a look at my published stories and the internal style guide and database of past stories. He caught up with Zane and Linda (previously the CoS and who is now a designer/sub) who is a friend of Jschool. He was impressed that Zane and I were wearing a neck chocker so that was pleasing.  The inevitable iPhone came out and he took a shot of me slaving away in the newsroom.

I learnt a lesson today when it came to a photo shoot. It was at the local art gallery and it was only when the time came, that  I realised that I had forgot to notify the management of our arrival. Turns out they were lovely about it. The subjects didn’t follow my instructions either by dressing up or bringing a guitar. Claudia, the snapper saved the day using the venue as a prop and framing the shot beautifully. Sometimes you have just work with what you’ve got and think on your feet.

Vox today was a sports question. Quite difficult to find females who can answer it. Political questions are far easier. But we managed to get our quota. Two females and two males. One young, one older. It’s a simple system to portray a balanced view.