Day two brought not only an added relief that day one was done but the realisation that today would be my first news conference and I was running with less than my usual 9 hours of sleep so I needed a coffee. Strong and large.

I arrived and within about 10 minutes the conference was starting. We did it in a large office and it was me, Inga, Erin, Nadia and Claire the Editor.

I automatically liked this all female dynamic and the jokes that they shared. We discussed different stories each member was going to be working on and some of them included the sexiest public transport line, news and current affairs in particular a police incident and Melbourne Spring Fashion Week.

As I had been working on my Flirt columns, I didn’t really have much to bring to the table and I was honestly enjoying just being an observer for this initial meeting.

We left shortly afterwards and I started my day by getting in contact with a sex therapist who could help me with some quotes. I had obtained her details through an agent I knew and she was very lovely.

Completed that story and got on to a psychologist who was also very helpful and happy to chat. I was surprised at how easy things were going so far and thankful that the things they wanted me to write about were completely up my alley and I didn’t find them too hard to find inspiration for.

Lunchtime whizzed around the corner and I had an average lunch of Irish stew which tasted like a good amount of flour had been used as a thickening agent and it had been nuked. De-licious.

After a less than satisfying lunch, I headed upstairs where I was helped by Kathy, one of the ladies who does writing but helps out as a sub, who introduced me to some of the girls who take care of the Goss & Glam section.

I was introduced to Georgie who was very sweet and showed me what they do which included look for images of celebs on Getty Images (awesome!!!) scour celebrity websites for new stories (oh my…. this is getting BETTER!) and attend runway shows for fashion week (AHHHHHHH!!!!)

This was my ultimate gig. It was fun, fast paced and very cool. She said she had been at the paper for around four years and loved it. Who wouldn’t!

After lunch, I had a chat with a writer who’s career I’ve followed for sometime and his name was Cameron Adams. He is an entertainment and music journo and the stories he told me were priceless about celebrities he has come across over the years and bizarre interviews.

The interview was fab. The owner and I got along really well and she let me try the goods. Let me just say the Red Velvet cupcakes were divine and I had to stop myself from asking them to pack up the rest of today’s stock so I could make myself sick on them in my room. 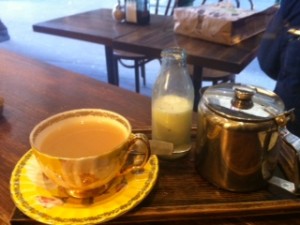 We wrapped up the interview and that leaves me at this current moment sitting on my bed contemplating getting ready for a yummy last meal out with my friend Natalie who had visited me for the last few days from Sydney.

Overall, am having a wonderful time and will be very sad to wrap up my time at HWT/mX and Melbourne.