Day 4 – A chilly morning in Melbourne 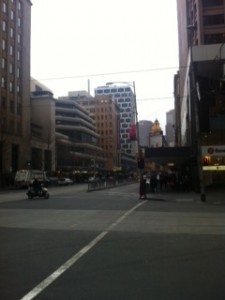 Sorry for the lack of blogging. The food has taken over and I haven’t seemed to catch a break to blog!

Thursday was a good day. I did some vox pops alone which was both terrifying as approaching complete strangers seemed odd, but funnily enough most people don’t have much of a problem speaking to a girl with a notepad.

One thing I learnt was the power of a back up plan. With the voxxing, you need to take a happy snap of your victim and when I went to take the photo and no picture appearing on the screen, I ripped out the ever reliable iPhone to take some pictures.

Sadly for me I didn’t realise the bigger problem with this exercise and that was the iPhone format of photos doesn’t work with the paper and I needed to send these photos to pictorial where they would be reformatted.

Trying to do this with a brilliant, fast 3G Vodafone network seemed great in theory but when I was nervously tapping my desk because it had been a whole 10 minutes with no sign of the pics on my email, I cursed myself for being too stingy to pay for Telstra’s coverage.

Eventually the photos came through and I sent them off along with responses.

I had some more work to catch up on that I was helping some other reporters with so I carried on until my tummy kept growling and I needed to get some lunch.

One golden rule of journalism at HWT is that most people don’t leave the office to eat. They bring food in or buy a sanga off the trolley that comes twice a day and work furiously on stories that need to be filed.

Most days I would grab a toasted wrap from the below food court and work through a story in between bites but today I really felt like I needed some fresh air and fresh inspiration so I left the office and went for a walk.

Having a wander over the foot bridge and watching everyone rush around like ants that were running around from a spilled water puddle, I noticed that the sun had begun to creep out.

I also noticed a fab little bar below the foot bridge that looked pumping with office workers like myself drinking a variety of drinks with beer and Pimms/lemonade seeming to be the popular choice.

Taking note of where this brilliant little bar was to go on Friday, I walked back to the office where I had a few more things to do before home town.

One of those things was calling the companies on my Fathers Day gift ideas to make sure availability was clear for this Sunday.

Amazingly the majority of companies I thought were available, weren’t and when I quizzed them to tell me a competitor that may be open,  none of them were much help.

After the stress caused by this exercise, I packed my bag up and left the office as it was past 5pm and I was well knackered.

Shortly after work, I met up with some friends from Brisbane and we had one of the best Greek meals ever. Delicious dips, warm pita bread and an array of meats. It was divine!