No driving for me today thank god. I met Russel at the office at 9am for our little adventure to the Sunshine coast. The drive was relatively uneventful, just a good opportunity to chat with Russel about the industry. We were picking up our subject up from Beerwah station, his name was Kenneth. Ken was a card indeed, short canary yellow shorts, a maroon windcheater that didn’t quite cover his stomach, orange bucket hat, no shoes, each toe painted a different colour, bracelets on his wrists AND ankles, a shock of grey hair that stood on end and skin that looked liked leather. 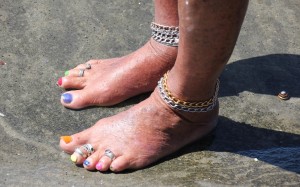 His voice was a register higher than I expected and he was extremely chatty, happy to divulge any and all information about himself. He had had three wives, two of which he was married to at the same time. He currently had a girlfriend who he visited regularly. He had an accident as a child which left him with brain damage. He had a foot condition which meant he couldn’t wear shoes and had to carry a medical certificate and letter from the Brisbane City Council to say he could ride the bus without shoes on. He is a painter and photographer and an avid nudist.

We went down to the beach to take the shots and it was a nice rocky outcrop with shallow pools of water and green blue ocean in the background. I could tell the photo’s were going to be great. We used the light box for the first few shots. Ken wasn’t naked at this point, we took the shots from the waist up. We moved a little further down the outcrop so as to have to the best vatage point in which to survey for possible onlookers. There are no legal nude beaches in Queensland and so we didn’t want to get into trouble. As Ken was about to drop his dacks a family with two children came round the point to explore the rock pools, it was a close call. As we waited for them to move I got to play with my new DSLR (I had finally gotten the balls to bring it out in front of a real photographer, it only took three days). 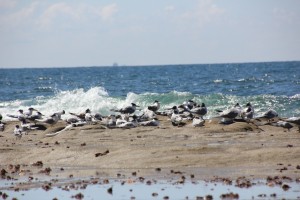 Ken was really discreet when getting his kit off, which I found surprising. Not that he was embarrassed about getting naked in public but was just aware of other peoples feelings, I respect that. I thought I might get away with not even seeing his bits because he was sitting down on a rock with his legs crossed, I wasn’t so lucky. Russell asked him to stand up so he could take a photo from behind and TA DA there it was. 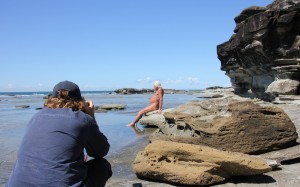 The shoot didn’t take very long and then we were on our way back to Brisbane, with Ken tagging along for the ride. He didn’t stop talking the whole time but he was entertaining to listen to, I can see how he would make a great feature subject, getting stories from him is like getting water from the ocean. Ken explained the according to a study done by a mental health body in America nudists are the most sane people in the world. In between Ken’s rolling monologue I managed to hear about Russell’s personal project, a body a work shot  in India spanning 28 years. It started as a project for his last year of art college and became a life long passion. Russell has really inspired me to learn as much as a can about photography and one day I hope that I’ll be able to take some amazing photographs.