So today I drove up to Sirromet Winery at Mt Cotton which is on Brisbane’s bayside to the south. It was a much shorter drive than yesterday and really pretty too, I could see myself living out there. Restaurant Lurleens, where we were taking the photos, sits on top of one of the rolling hills and looks out over the grape vines at the winery. When I arrived I met Jo. She is one of the page design staff. Russell offered me a coffee and they brought out one of the best cappa’s I’ve ever had. 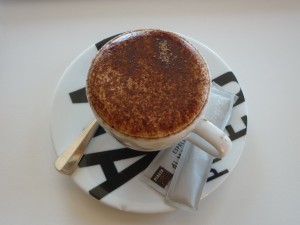 I met Andrew, the head chef at Sirromet. He’s a tall dude with dreadlocks all the way to his butt. 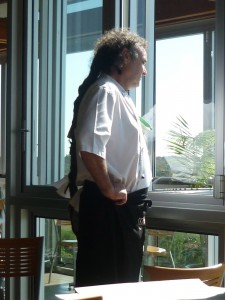 Today they shot two groups of dishes. One is for Pesto recipes and the other is for lamb recipes, they only use one of the two in that week’s issue but Jo explained that they need to have a few options available. The first dish for the pesto’s came out – mini pizzas! they had tomato and olive pesto, sun dried tomatoes, anchovies, boccocini and basil on them. Jo used a bunch of different platters to arrange the pizzas for the shots. At one point she moved all the pizzas over to one side of the platter and I thought it looked silly but she explained that she would use the blank space for the heading of the article. I thought it was amazing that, not only was she looking for a good photo of the food, she was planning how the page would be laid out as well. Once I understood that aspect of the design it was much easier to see why she was arranging the dishes in certain ways. 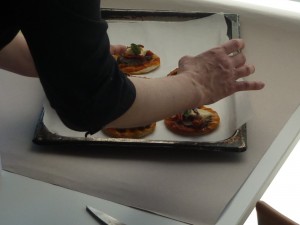 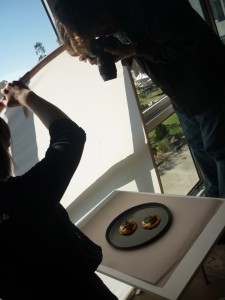 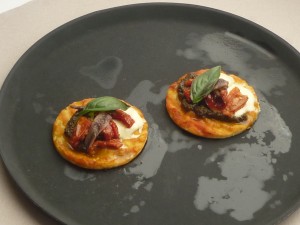 They didn’t use a flash today, just a diffuser and a reflector to manipulate the natural light.

The second dish was Bruschetta with rocket pesto, chilli, garlic, roast capsicum and micro-rocket. Andrew said that micro-rocket works out to be about $400 per kilo. Chefs buy it in little punnets, hundreds at a time, and cut the tops off to garnish food. The mini pizzas and bruschetta were delicious. 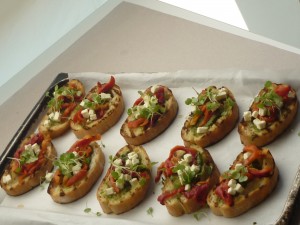 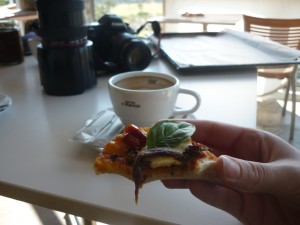 The second lot of dishes were lamb meatballs and lamb neck provincial. I don’t like lamb so I didn’t try any, plus I was completely stuffed from all the food and coffee (yes I got another amazing coffee) I had already consumed. Both Russel and Jo were really open to questions and didn’t make me feel like and idiot, even if the answer to the question might seem obvious. 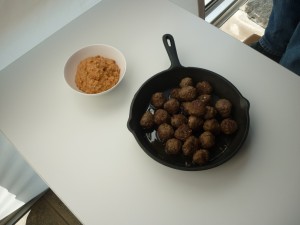 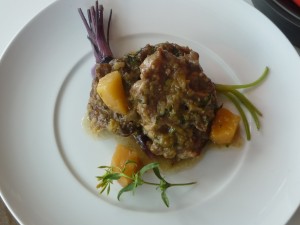 Andrew showed me some of the fish he had caught out on the bay, four huge Knobby snapper. He gave me some advice on what’s good snapper and what’s shitty snapper…so don’t buy red snapper from the supermarket, cos that’s they shitty one. I was allowed to take the lamb meatballs home for Scott, which he loved.

Tomorrow I’m going to Noosa to shoot a nudist. And yes I’ll take some photos.