I flew up to Cairns for a holiday. Not to hang out in Cairns which is a tourist factory designed to fleece everyone, but to go hiking in the untamed tropical jungle for a week or so. Airfares were booked months before to save money and the rest of the trip would evolve. My airfares were 110 each way. Bris – Cairns.

Turns out all the hire companies that had any 4wds left would not consent to us driving on anything but a sealed road! Crazy. Why would I want to hire a 4wd if I was not going off road, or at least on a gravel road which is all there is north of Cook town. Ahh the Queensland tourism industry – strange its not going well.

So ever resourceful , my friend Stuart and I put ads on gumtree looking for a backpacker with a 4wd to drive up north so we could go hiking well away from civilisation.

We stayed in a hostel next to the Cairns Central shopping centre and went shopping for food to fill our packs that would make 7 dinners, 7 lunches and seven breakfasts. Turns out thats a lot of food. Packs were heavy. We hoped to catch fish or trap a pig but could not rely on it.

The day before we were due to leave we thought we would have to catch a bus and hike miles from the road to the rainforest. But at 3pm a German bloke called. We met him at 6pm for a chat. He seemed ok. Paul is an economics student from Hanover taking a year off traveling all over Australia. Calm and relaxed he had a 10 year old Nissan 4wd he had bought for 4000 dollars. It was reliable and was perfect for the trip we were planning. Done.

He said he would pick us up at 8am next morning. At 8.30am the next morning we got a text to say he had a flat tyre.

We packed our backpacks carefully and left a big bag of non essentials at the Ryan guest house.

Paul arrived eventually and we drove to a tyre place to get the tyre repaired. Then to the supermarket to get some food for Paul and finally set off north.

We stopped at Daintree village for a croc burger (very touristy) but croc meat is delicious and you don’t see it much in Brisbane or Melbourne. I wonder if there was a croc out there waiting for us thinking the same thing about humans? Then we drove to the ferry crossing at the Daintree river, before heading through the thick rainforest , Cassowary
signs lighting the way. 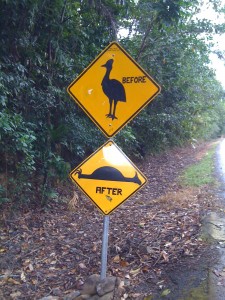 Beyond Cape Tribulation , the standard tourist sightings stop as the road becomes a part time track. This track is destroyed most summers by raging rivers that fly down the hillsides with huge destructive force bringing with them rocks and trees. The rainforest is thickly carpeted over steep hills. The track is at times at 40% gradient up and down with a rocky river crossing at the bottom of each perilous decent.

After about 4 step ups, downs and river crossings we drove through the Aboriginal community with a big police station well secured by double fencing perimeters.

At the Bloomfield river crossing we saw no crocs but local children swim on the “up river ” side have been taken by crocs I am told.

Light was fading so we took a right towards Weary Bay to find a camp site. We saw the police leave as we drove past having probably finished their check of the beach area. We drove along a sandy track next to the wild ocean shore strewn with bone white drift wood. We  found a clearing to make a campsite hidden from the beach behind thick forest.

We made a fire and cooked up dinner. After dinner Stuart saw a rock python in the tree 2 meters from our tent. It’s grey/black patterned scales looked remarkably clean and shiny. It froze thinking we could not see it wrapped around the grey tree branch it’s eye reflecting bright green from our torch lights. It must have been there the whole time we were cooking only three meters away. We admired it but left it alone. It had just eaten something as it had a bulge in its middle. It is not poisonous but a bite would be nasty. It’s sharp curved teeth are covered in rotting mice so an infection would not be fun.

Next morning we drove to a homestead owned for 33 years by an 80 year old South African emerge Hal. Hal had been educated in Durban and went to Rhodesia (now called Zimbabwe) to farm. We were greeted at the farm by Missy the horse who was inquisitive and insistently but gently pushing me into the car with her nose, smelling the food. Quite a character. Hal had left when President Mugabe took power. His grand daughter Rachel was kind enough to let me have a welcome shower before we locked the 4wd and set off into the rainforest proper. We hiked for five hours through the rainforest, mostly up. I was sweating and puffing up the step hills being totally unfit. We stopped for a lunch of boiled eggs in rolls with mayo at a river crossing and took off our shoes to check for leaches. While eating our lunch we watched for any sign of snakes or crocs in the river. Our German friend Paul had one leach that had it’s razor teeth covered head well into his leg and was fat with his blood. We burned it off for him with a lighter, much to his distress. We assured him the burn was much less harmful than leaving the leach on. We filled our water bottles and waded across the river. We came across Cassowary poo quite often. These giant birds are very dangerous so we kept our eyes open but did not see one.

Check out this video on the cassowary to get an idea.

We saw lots of wild black pigs and they had dug up the soil all over the place. The forest was full of pigs.

Then after another two hours — mostly up — we reached a rare clearing in the jungle.  We made a campsite on the edge of a cliff and set a trap for a wild pig. We cooked up some calzone pizzas in foil for dinner that night and cooked them in the hot coals of our fire. (For those interested this is a perfect hiking meal. We had middle eastern pita bread, coated one side in tomato paste, cut up fresh tomatoes, green peppers , long life cheese, pepper, chili flakes, garlic, mushrooms, onion, ham or salami and a bit of olive oil to carry the flavor. Fold over the bread in half and wrap it in thick extra strong foil. Folding the foil and sealing it carefully before putting it in the hot coals to cook. It is ready when you hear a sizzling of the cheese ten minutes later. YUM!)

It was cold up high in the hills that night and it rained — wetting the jungle.

Day 3 was a massive one. Ahead of us was a eight hour hike through leach infested newly wet rainforest up and down, then a big descent towards the ocean. We could not stop for rest as leaches multiplied on our legs , feet , ankles if you stood still for more than 10 seconds. We developed a technique for pausing for a few seconds every five minutes and ripping them off before they could get their hungry razor sharp heads buried deep in in our flesh before moving again so more did not follow. The rainforest was wet, the track overgrown and easy to lose. Several times we had to go back to find the track in the mist.  We found a dry spot with no leaches on a step decent at about three o’clock and had a well earned rest and lunch. Paul had three leaches inside his shoe to burn off. Then we set off again to try to beat the dusk to the beach. We eventually ran out of water and was so relieved to finally come upon a creek where we greedily drank half a bottle each. Feeling better we filled all our bottles and continued on through the prickled palms and leaches.

Finally as our decent took us out of the misty clouds, the ground was dry and the leach assault dwindled as the land flattened out we could hear the noise of the ocean waves in the distance.

Then the track led into a field of rounded stones and tall coconut trees and finally the very wild driftwood strewn beach. Not a single person to be seen from one end to the other. It was a beach of huge pebbles, thousands of old coconut shells and tons of driftwood that looked like huge white bones. 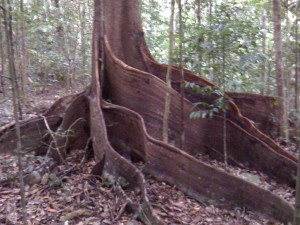 We made camp on a grassy flat and made a vege curry , exhausted we went to sleep at 8pm.

Wild pigs remerging through our campsite pots and pans woke me in the early hours. We were beginning to live to the rhythms of nature and light. Gets dark we go to sleep–gets light we wake up. Hungry we eat. Next morning we woke at first light and packed up to walk along the wide beach at low tide before it was covered by the sea. We passed an abandoned hippy lean too. Apparently in the 60,70s there was a group of hippies who tried to live out in the rain forest between Cairns and Cook town. Long abandoned they found the rat race less objectionable than trying to survive in the wild and dodging the police who tried to kick them out. 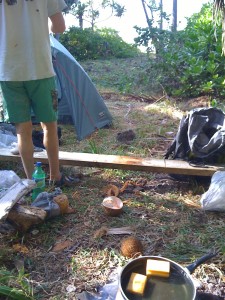 We walked past several tidal estuaries that could be described as feature material for ” salt crocodile home beautiful magazine”. Indeed we saw fresh tracks of two huge saltwater crocs at these billabongs that are flooded at high tide. Every day at dusk. We found a high ground clearing far enough away from the croc filled estuaries and set up tent.

We stayed for a few days here and enjoyed the sound of the ocean and wandering the beach and reefs at low tide. 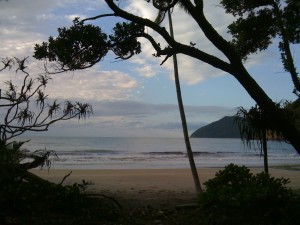 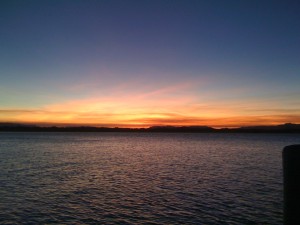 When we were woried we may run out of food we packed up and hiked along the coast rock hopping. 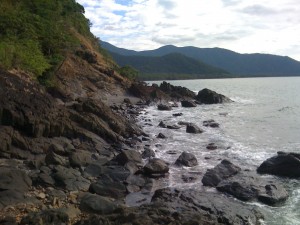 We finally emerged from the jungle to a home stead and met John Stephens who had been here 38 years. He gave us some of his natural bananas he was growing. They were smaller than the commercial bananas you buy at the supermarket and the flavour is so good. Much better.

We told him about the massive number of pigs in the rainforest.

“Need to give a few local hunters with pig hunting dogs to hunt for a few years to get them under control.” he said.

We hiked out to the road and hitched back to our car which was 15 miles north. Then we drove to Cook Town and booked a room at the local pub. Pub full of real Australian characters --no pokies too

We stayed at the Top Pub in Cook town. Real old Australian pubs. Cook town has not yet been ruined by mass tourism and still has a sleepy old small town feel.

We hung out in Cooktown for a few days to let the blisters heal and relax.

Then we drove up to to see some 16,000 year old aborigional Art.