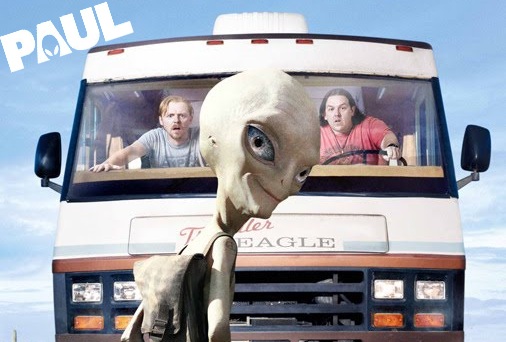 Dynamic duo, Simon Pegg and Nick Frost are at it again, making waves in the comedic  element known as cinema, this time setting out to challenge any and all alien-related stereotypes that have shaped our view of the unknown.

The film follows two English tourists and comic book enthusiasts, Graeme (Pegg) an illustrator and Clive (Frost), a science fiction writer, as they make their way through the US country side to visit the well-known alien hot spots; a trip they’ve dreamt of taking for a very long time.

Stumbling upon the two by accident is alien on the run, Paul. Seth Rogen; writer, actor and all round funny man; does the vocals for our newest extraterrestrial friend, who is most certainly not the standard alien, except for his incredibly obvious alien appearance. Perhaps, a little too obvious. However this does not hamper the journey the three very likely but unintended friends embark on, realising there’s more then meets the eye when it comes to random aliens you pick up on the side of the road.

They seem to run into a bit of hot water when they unintentionally and unconvincingly kidnap the rather attractive daughter of extreme religious man and owner of the caravan park they were camped in. After a bit of convincing that Paul is not the devil, the rather attractive daughter, Ruth (Kristen Wiig) beings to question her very existence as a young, religious woman and begins her rebellion. With cameos’ from Jane Lynch, Sigourney Weaver, Jo Lo Truglio and Bill Hader, there’s definitely some laughs to be had.

A very funny take on an alien-oriented story-line, if you have the chance to see Paul, I highly recommend you do. If nothing else, you’ll come away from the experience with a few choice swear combination and a few giggles as well.