Shortly after starting JSchool, I was catching a bus home, when the guy next to me decided to strike up a conversation. 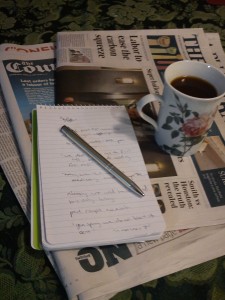 “Just finished work?” he asked. I replied that I was just coming home from class, and was studying journalism.

“Oh they’re a bit dodgy aren’t they?,” his response. Big Sigh from me.

Its not exactly breaking news that journalists have a bad rep sometimes.

The documentary by John Pilger (“The War You Don’t See”), recommended by fellow JSchooler Oliver, is something I really valued watching . It was about everything that didn’t get coverage by war correspondents in campaigns past, and the impact of that big gaping information hole on peoples lives.

*Now, just for clarity’s sake, I’ll say straight out I’m not intending to debate what was right or wrong about the actions of journalists and governments in the past.*

What I will comment on is how it affected me. Watching this, I couldn’t help but feel greatly humbled. The responsibility of journalism can be enormous.

One of the journalists interviewed claimed that the Iraq War wouldn’t have happened if journalists at the time had asked the really tough questions about the reasons for going to war. Regardless of whether or not this is true, it does rather effectively hammer home the issue that journalism may change lives.

More locally, I recently interviewed a journalist whose concerted work on child protection issues and disability housing resulted in changes to the child protection system and legislation on disability accommodation, improving safety and security for a vulnerable population.

Personally, I find journalism – being there watching the events that make the news (in both senses), and potentially watching history happening – energising and a whole lot of fun. Frankly, I feel a bit like a kid left in a candy store; I really get to learn about just about anything that is somehow important? Good grief! My nerdy intellectual dreams come true.

But, with all the fun I’m having, its easy to forget the important role of the Fourth Estate. And to forget that this job is so much bigger than any of us are.

How do you feel about the idea that your writing, or lack thereof, may one day have such a large effect as to alter the course of war or incite change in legislation? Could you ask the really hard questions, that you think need to be asked?

If your employer asked you if you feel up to the task would you say “Why yes, indeed!”, or would there be a sudden commencement of awkward shoe staring, and eye contact avoidance at all costs?

It takes a big shiny pair of brass balls to stand up to the people in power.

Now, I doubt that anything quite so life or death is going to be heading our way just yet, or even soon. But, the journo I interviewed had a little advice for freshly minted keepers of the Fourth Estate: Take it seriously. This was said snappily, and with plenty of backbone behind it, galvanising newbies everywhere.

I know that I’d struggle if I were in a position right now to ask those tough questions. If reporters past have struggled, its a fair bet that anyone would.

So what renovations do you need to make to be able to handle that responsibility someday? What do you need to learn, what attitudinal changes need to be made, what work do you have to do?

Again, not a question that needs to be answered in such a forum as this, but they’re certainly questions that’ll be on my mind. Even if you don’t ever have to face such challenges, the getting ready for whatever the world throws at you will almost certainly make you a better person. Up to the challenge?

« MURDER TRIAL » The decline of the ‘overnight celebrity’