A Thing About the Guy Who Did Stuff 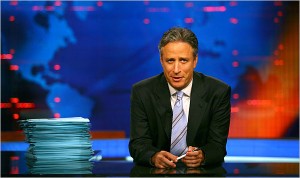 Jon Stewart is a funny guy. According to many people he’s touted as ‘The Most Trusted Man in America’.

Haven’t you heard?! Seriously, ask anyone.

Or better yet, ask the 250, 000 or so people who swamped the National Mall in Washington D.C. on October 30’th last year for his ‘Rally to Restore Sanity and/or Fear’. The rally, organised by professional satirists Jon Stewart and Stephen Colbert, was an ironic take on the Hard-Right ‘Tea-Party’ movement which held a rally in the same place a few months beforehand.

Republicans were poked at with the usual sly cheek, with Sarah Palin peddled as the usual scapegoat (C’mon the lady invites parody), but it proved something interesting. Although political satire is hardly a new idea, it proved that it is more than a trend, that it is gaining serious momentum as an alternative source of news in not only America but in the Western World.

More than ever are people turning from traditional forms of news to satirically charged news programs like the Jon Stewart Show, The Colbert Report, The Chasers and to an extent the 7pm Project. But why now, why all of a sudden the groundswell of support for this medium? A medium which until now, was scarcely noticed by politicians and commentators alike but is now a legitimate source of opinionated news.

It’s simple – we all want in, we want to know what’s happening. But when conventional newscasts can be somewhat hard to penetrate for the political novice, satirical shows cut through the complicated and daunting aspects of it all (often poking fun at it in the first place) and break it down to an audience that may not necessarily have had a clue (or even cared about) about in the first place.

This is exactly why we need satire – in the mad and increasingly convoluted world of politics, it has become an necessity to use light-hearted satire in order to gauge our opinion of the political processes.

Obviously a rough understanding has to be there from the beginning – I’m not saying you could just place your 3 year old in front of Stephen Colbert and expect him to come up with an understanding of how Congress works. That’s just silly.

But it raises the important issue of people like Stewart and other satirists utilising their comedic talents and acting as mouth pieces for certain demographics. Demographics like the youth movement (a crucial demographic of potential voters), Muslims and Immigrants. The world over Stewart has been known as a strong advocate for the rights of minorities like the aforementioned.

Late last year, Stewart was credited by the White House as well as international media outlets for bringing to light the shameful Republican filibustering of the James Zadroga 9/11 Health and Compensation Act. The act was to enable the proper subsidisation of workers who fell ill due to their exposure to toxic chemicals during the clean up of the World Trade Center. The act was supported unanimously by the Democrats but initially failed to have it passed due to its blocking by the Republicans.

A few days later on a nightly episode of The Daily Show, Stewart was livid. He publicly chastised the Republican party and spruiked the bill’s legitimacy with a passion devoid of any comedic value, just pure unadulterated anger – a take which genuinely surprised his regular viewers (myself included).

With the amount of support Stewart rallied to the cause, he pushed a considerable amount of pressure on to congress for the passing of this bill. It was only a matter of time before it would eventually recieve congressional approval (which it eventually did on the 22nd of December, 2010).

As evident in the past few years, political satire has become more than just an ‘Comedian’s Guide to Politics’, it’s a forward moving think-tank. One which seems to be raising awareness for issues that might not necessarily make the evening news.

« Dancing Feet » Getting an Education…