Notes from a FREE,FREE PALESTINE !!!! march 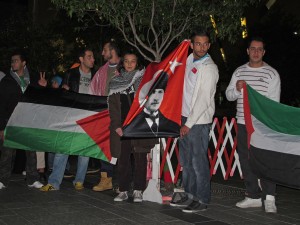 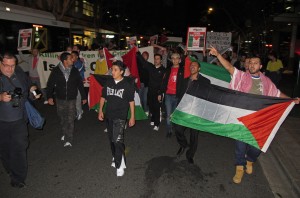 Huge steel balls wrapped in wool and the colourful lights on the casino building were the backdrop for a demonstration against Israeli action under the banner of ‘Justice for Palestine’, Tuesday night. Searching in the milling crowd before the speeches, I looked for John Blue and found him already recording, immersed in journo mode. Em arrived a bit later and they feature in lots of my photos!

Dave J, it was an interesting crowd and I think there were quite a number of your ‘usual suspects’ present too; the small crowd was a mix of young ethnically clad whites, a few traditionally dressed Muslim women, a band of young, dark-haired men sporting the checker-patterned kuffiya and waving the Palestinian and Turkish flags, and quite a few slim, ‘hippie-ish’ older people with the slightly resigned, watchful air of seasoned activists. There were parents with small, pram-bound children too and some teenage boys.

We live in a global village and the ‘cause’ is common to all nationalities – the speakers consisted of an impassioned Irish orator, two Brits, a Jewish grandmother and a heavily made-up, black-clad Australian lady. Those who bore an ethnic resemblance to traditional Palestinians and Turks wore kuffiyas and stood in the background, waving Palestinian and Turkish flags – one with a leader / martyr?? – Dave, maybe you know who this is ? They came to the fore when the march started and led the FREE, FREE PALESTINE!!!! chants.

Many of the updates from the Free Gaza Movement were sent to the outside world via twitter.

Fervent civil rights proponent and educator David Alberqueque seemed to be in his element as the initial announcer, encouraging passersby to join and sign petitions abhorring recent Israeli actions; he does not belong to any of the organisations represented and said that he was angry at the government for their double speak. He felt those leaders who spoke on Anzac day were being hypocritical and insulting the vets with their continued support of the aggressors(!)

The men and women in blue stayed in the background, making no attempt to blend in but stood closed with folded arms as they kept an eye on proceedings.

Red-lipped, hajib adorned Kathryn Z (heavy kohl, doll!) of Justice for Palestine took the mike and made an impassioned plea for action. She introduced the speakers – none doubted her sincerity or commitment to the cause as she said, “We will never, never accept the obscene, criminal brutality the Israeli state has inflicted on the Palestinian nation for 62 years.”

As expected, most speakers addressed the crowd as ‘comrades’ – the socialist movement was well represented; many of the speakers had firsthand knowledge of the Gaza problem, having ‘recently returned from a feeder trip.’

David Ford, CFMEU member and newly elected Amnesty international president for Qld and NSW, referred to the apartheid being practised by Israel and alluded to the revelations of ‘Australian story’ to embed the Australian apartheid connection.

Short, tousle-haired speaker (?) addressed the crowd in his thick, Irish brogue, dropping the odd expletive in his heart-felt tirade to applause from the crowd. He referred to the martyrs from the latest atrocity and decried colonialism, racism and Zionism.

An older, petite, jeans clad Jewish peace activist spoke and apologised to the crowd that her facebook contact had been unable to confirm protest action in Israel due to the time zone difference – social media to the fore again!

Next up was an Aus/ English politician, also just returned from Gaza – she asked for sanctions against Israeli connected companies, Motorola being the one I remember.

Phil Mansour, well-known Brisbane singer/ songwriter completed the speaker’s bill, active as a dervish as he roused the crowd. He too seemed well informed, having also ‘just returned from Gaza’. Looked him up on Google and think some of his music is good.

At the end of the speeches and a fiery call to action, the small, vocal crowd unanimously decided to march in unsanctioned protest action – the police patrolled alongside, low profile- the loud, chanting refrain of “FREE, FREE PALESTINE!!!!” echoed through the streets of downtown Brisbane. Pedestrians, motorists and commuters waiting for their ride looked on in awe, some clapping in support. It was interesting to see random people join the small swarm of chanting marchers; a big guy with a dagga-fronted t-shirt dropped in for a while. How good is it that people can embark on a really peaceful march without any fear of harassment?!!

I really enjoyed walking backwards and filming the march with my camera – found out afterwards that I had lots of light flare from bright halogen lights but otherwise some was really clear – only walked into a lamp post once!! Apart from a sturdy photographer who battled to stay in front, John, Em and I seemed to be the only reporters – maybe the others were waiting for the real-deal one on Friday?

The united body of marchers meandered up Creek – the sturdy photographer was a goner –and left into Ann and peacefully petered out after a short closing speech- the sudden cessation of activity seemed to bring an anticlimax to the evening. Some left for another protest event organised at QUT gardens and the socialists surreptitiously handed out messages about Greek workers – thanks John Blue and Em!

« The district of the man with the purple heart » First day of internship over – before its even really begun!